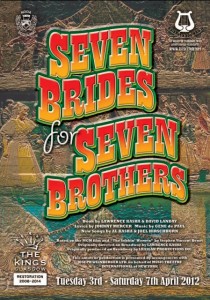 Set in Oregon in 1850 Seven Brides for Seven Brothers is the story of Adam, the eldest of seven brothers, who goes to town to get a wife. Not only a beautiful woman, but one that can cook and clean and transform his pigsty of a farm into a real home. He convinces Milly to marry him that same day and they return to his backwoods home. Only then does she discover he has six brothers, all living in his cabin! Milly sets out to reform the uncouth siblings, as they are inspired by Adam and are now anxious to get wives of their own. Then, after reading about the Roman capture of the Sabine women, Adam develops an inspired solution to his brothers’ loneliness… kidnap the women they want

SEVEN BRIDES FOR SEVEN BROTHERS   ****
The Lyric Club at King’s Theatre Glasgow, 4 April 2012
An old-fashioned show with a start, middle, and happy-ending? Yes. A “traditional” production which is fast-moving, bright, colourful, and full of energy? Yes. A strong and talented cast headed by two exceptionally talented leads? Yes. A great night out at the theatre? Yes. The Lyric Club’s “Seven Brides for Seven Brothers” is all of that and more. Director Alan C. Jones and MD Tom Daniels have brought together their combined talents and years of experience to stage one of the most vibrant productions seen in Glasgow’s King’s Theatre for a long time. The company is relatively small in numbers, but there are no passengers, and Jonathan Parsons & Marie McElhinney’s choreography cleverly goes for the strengths of both the principals and chorus. Seriously – everyone is so good! And J. Campbell Kerr and Catherine Mackenzie are spot on in the main roles; they look great, they sing exceptionally well, and their enjoyment leaps out over the footlights. I particularly liked Mr Kerr’s singing of “Where Were You?” in Act II, and the Act I trio “Love Never Goes Away” was beautifully performed and staged. Andrew Jack made his mark as Gideon, and he and his fellow brothers really worked so well together – as did the Suitors of the town; there was never any feeling of first cast and those who were left; that is where the strength, and therefore  success, of this show lies. The brides, too, were all individually characterised, they looked beautiful, and they all displayed great senses of humour! What a wonderful night of theatre! Thanks, Lyric Club, for this “Seven Brides for Seven Brothers” – it was just what was needed on a bitterly cold April night.
Walter Paul