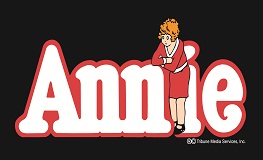 Annie is a heart-warming, rags-to-riches story of her adventures from Miss Hannigan’s New York orphanage to the luxurious home of billionaire, Oliver Warbucks, where Annie and her loveable dog Sandy are placed for a week as a part of a publicity campaign. However, Annie’s stay turns out to be much more than anyone had bargained for as she works her way into everyone’s hearts. Unlike most of the other children at the orphanage, Annie believes that her parents are still alive and will one day return to claim her. So when Mr. Warbucks offers to adopt her, she asks the most powerful man in America to help find them and he agrees. Warbucks’ huge reward for Annie’s parents attracts the attention of con artists Rooster, Lily and the wicked Miss Hannigan, who hatch a plot to kidnap Annie and take the $50,000 reward. However, this classic family musical has a happy ending and the audience goes home with that feel-good factor.