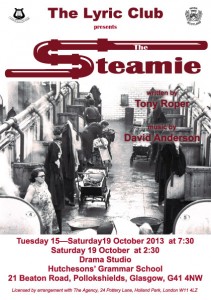 The Lyric Club presented The Steamie from Tuesday 15 October to Saturday 19 October at 7.30 pm each evening (and a matinee at 2.30 pm on Saturday 19 October) in the new state-of-the-art Drama Studio in Hutchesons’ Grammar School, 21 Beaton Road, Pollokshields, Glasgow.

This award winning play by Tony Roper, with music by David Anderson, was first performed in the Crawfurd Theatre, Jordanhill College of Education, on 1 May 1987. It was subsequently presented as Talk Of The Steamie at the Greenwich Theatre, London, in 1989. Tony Roper later adapted it for television and its screening attracted Channel Four’s highest ever viewing figures in Scotland.

The Lyric Club now offers you another chance to spend an evening down at the wash-house with Dolly, Magrit, Doreen, Mrs Culfeathers and Andy, the mechanic.

Tony Roper’s classic is set in an old Glasgow steamie at Hogmanay sometime in the 1950s. The lassies are gathered to do their final wash of the year. You’ll laugh till you cry as you watch them share their secrets from the old year and their hopes for the new. These are “Glesga wummin” at their unbeatable best, laughing, gossiping and girning.

Will Mrs Culfeathers solve the enigma that is Galloway’s mince? Will Doreen ever get her dream house in Drumchapel? All will be revealed as the lassies roll up their sleeves and open their cairry-oots … 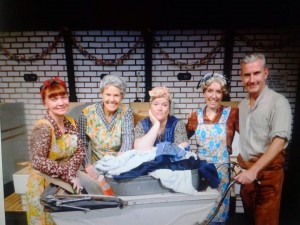 The Lyric Club THE STEAMIE   * * * * 17th October 2013; Drama Studio Hutchesons’ Grammar School Glasgow Tony Roper must be in seventh heaven these months – his famous play THE STEAMIE seems to be everywhere – and why not? This iconic play has become a classic of its kind, and Alan C. Jones’s production of it for The Lyric Club in Glasgow remains faithful to the original, more or less, and after a slightly slow first ten minutes the whole play took off and the full audience loved every minute of it. Simple but effective lighting was used for all the set pieces in this intimate studio space, and the set, designed by Jack Murdoch, captured perfectly the steamies of the 1950s in Glasgow. I am still not a big fan of the music (by David Anderson), as it seems to me to slow down the pace of the piece, especially in Act One, but this company boasts four excellent singers who actually manage to sell the songs to their audience, particularly the two big ensemble numbers in the second half. The small cast worked hard, tirelessly, and bonded together to retell the familiar story, with the audience gleefully anticipating every tale or song or set-piece. The four ladies were played by  Liz Mitchell (a simple, effective, and quiet performance as the elderly Mrs Culfeathers), Catherine Brannan-Usher as Magrit, Emma Louise Nisbet as the young Doreen (with a lovely clear and incisive soprano voice), and Elaine Wilkie in the show-stopping role of Dolly, who worked her audience so, so well, and got every ounce of humour, and pathos, from the character (created by Roper), which has now become a legend in Scottish theatre history. Andrew Rodger completed the cast as the increasingly inebriated Andy. The pace was good, especially in Act Two, and while the Mince story brought delighted noises of anticipation from the audience, and a tremendous round of applause at its conclusion, I find myself more and more drawn to the telephone conversation between Doreen and Magrit, and of course Dolly, as being my highlight not only in this excellent production, but in the actual play. What a great night out, what a great play. Walter Paul

I have to confess to only once before having seen this little slice of Glasgow History — because there is definitely a Glasgow / West of Scotland slant to Tony Roper’s very funny script.  A compact piece, with just the five characters each of whom most people recognise in their acquaintance, if not friends and family.   Magrit (Catherine Brannan-Usher)  quite pushy but more refined, Doreen (Emma Louise Nisbet) quieter and caring,  Mrs. Culfeathers (Liz Mitchell) older and sometimes needing help and then Dolly (Elaine Wilkie), a bit of a leader, brash and devil-may-care, but determined that Hogmanay will not pass without comment and a wee celebration.  Each obviously happy in an eclectic bunch which meets regularly in the wash-house, ostensibly controlled by Andy (Andrew Rodger), not averse to a cuddle if he can get it.  The patter was great, as always the discussion about mince — particularly Galloway’s — must baffle some people not from the West, and with ‘gallus’ Dolly, beautifully depicted by Elaine causing gales of laughter, but there was pathos as well, with talk of husbands not necessarily helping, or indeed able to help.  The inevitable bottle is produced, to celebrate the New Year, and Andy has too much, and there’s a tear or two, not just of laughter. All in all, a perfect evening’s entertainment.  A new venue, the Hutcheson’s Grammar School Theatre was just a nice size, the excellent standing set portraying the scene perfectly, and this talented team gave an excellent performance.